The Fratellis were supposed to play @ the Bluebird tomorrow, 5/2, but according to their Web site, looks like the show is canceled...

UPDATE: The Horrors won't be touring w/ BRMC but are doing some dates on their own. Details on their Myspace page. AND Black Rebel Motorcycle Club plays 5/17 in Denver with THE HORRORS, whose new album "Strange House" is out this month. I've heard the album, and thanks to the magic of MySpace, you can hear for yourself what they sound like. It's straight-ahead, high energy RAWK, M@ch!nes! NoIse! ElECTR!c! bwaaaah! Soundtrack to a wacky sprint through a garage punk haunted house. The best treat may be seeing them live. If you've heard the word from SXSW, you know all about their hair, stage dives and general chaotic behavior that makes you wonder if frontman Faris Badwan is a cutter.

***We got a lovely little package in the mail from Santa Dog, plucky UK band from Bristol. They've been putting out their own EPs and spreading their music around the world these past two years. In that short time they've attracted attention from SoundsXPerience and Quince Records, which is putting out their debut, full-length album "Kittyhawk" on June 4. It includes some of the best stuff from the EPs ("Chemical" where the vocals go from ethereal to rich), plus new songs, like the first single "Big Bang," out later this month via SoundsXPerience, and "Martyr on the Ropes," fun little song for changeup rhythms and dancing along. The vocals get top attention in the recordings. I'm curious to hear what Rowena's voice sounds like at a live show, so any of you overseas who've been to a Santa Dog show, drop a comment. Anyway, til the album comes out, check out more at Santa Dog's site::here::

Finally, Boston band Ashby (duo of Evelyn and Bill from OK, Somerville, not Boston) has a spot on MySpace where you can hear that great song "Horizon" whenever you want. No idea why they only have 33 friends.
Posted by Delicatessen at 9:50 AM 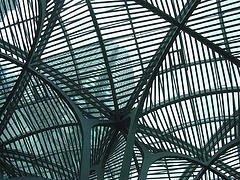 Delicatessen
We're a bunch of hard scrabblers and stragglers doing the diy thing to tell you stories that haven't been told...or at least not in our way. Pick up your copy of Delicatessen magazine in Denver and other random locales, just about every season. For music, news, entertainment and giggles.